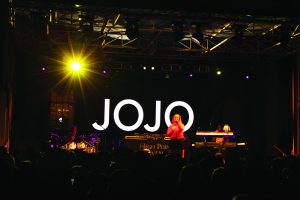 JoJo performed some of her famous hits, as well as covers of other popular songs. Photo by Sean Marcus

Fresh off the heels of this year’s Spring Concert, which featured Chase Rice and Cale Dodds, the Campus Activities Team welcomed JoJo and Two Friends on Sept. 19 for High Point University’s Fall Concert.

Doors opened at 7 p.m., and students massed to see the performance. By the time JoJo took the stage, Leah Leininger, an HPU student, mentioned how grand she thought the event was. “There are already more people here than last year, and the show has not even started yet,” said Leininger.

Many assumed that JoJo would headline the show but were mistaken. At 8 p.m., JoJo strutted on stage, dressed in a pink neon jumper. JoJo opened the show with her 2018 hit, “Breezy,” which boasts 762,561 streams on Spotify. With rifts that echoed around the quickly-filling yard, the crowd seemed to slowly warm up to her encouragement.

The crowd cheered during JoJo’s slower cover of Post Malone’s “White Iverson,” as their hands bounced and vibed with the singer’s rendition.

JoJo’s covers continued, and the crowd livened up to her cover of Khalid’s “Talk.” The crowd started to scream with excitement when JoJo began to sing her hit song, “A Little Too Late,” released in 2006. At the song’s end, Jojo blew a kiss and wished the audience a good night.

Hannah Lee Dixon, a senior at HPU, commented on the wait for the DJing duo, Two Friends. “It blows butterflies in the best way,” said Dixon, before disappearing into the crowd with her friends.

Before Two Friends took the stage, a woman appeared and prompted the crowd to move back two steps, after which she was greeted with much dissatisfaction.

Two Friends’ arrival was announced by the familiar notes of Queen’s “Bohemian Rhapsody.” Phones appeared, and flashes began pointing at the stage.

Two Friends was greeted by a roar of excitement from the crowd, which they responded to screaming into the microphone, “I heard you all liked Big Booty Remixes.”

Big Booty Remixes is the name the duo gives to their mixes, and their SoundCloud, which has 14 volumes. The DJs transitioned from one song clip to the next, as a remix of Bruno Mars’ “Treasure” folded into Justin Bieber’s “Let Me Love You.” The jumping, dancing and screaming of the crowd reached a high. Students were thrown out of mosh pits, colliding into other students, and the crowd matched the stage’s energy.

The duo leaned down to snap pictures with front row spectators and encouraged the entire crowd to get in a playful formation for their traditional concert selfie.

“Everyone loved Two Friends, and we all want them to come back again,” said Leininger.

Much speculation and excitement was expressed for HPU’s Spring Concert. CAT will be announcing HPU’s next musical guest early next year.