The Super Bowl is the most exciting sports event in the United States every single year. There was a lot of skepticism coming into the NFL season on whether or not the season would even make it this far. The NFL did a great job in dealing with the ongoing pandemic and has been able to play out the entire season with relative normality.

Now it’s the end of the season, and everyone is waiting to watch the big game. Let’s take a look at the Super Bowl matchup and predict who’s going to win.

Tom Brady has done it again, reaching the tenth Super Bowl in his illustrious career. Many people counted the Bucs out earlier in the season after a slow start and a couple of blowout losses to the Saints. Brady has shown this season that, even at his advanced age and in a completely new system, he can still put up monster numbers and lead his team to wins.

The Bucs have a loaded offense with tons of playmakers, including Mike Evans, Chris Godwin, Ronald Jones, Leonard Fournette and a revamped Antonio Brown. They have a lot of big names on their defense too, but together they have been relatively inconsistent this season. Ndamukong Suh, Jason Pierre-Paul, Lavonte David, Shaquil Barrett and Devin White lead an intimidating front seven, while Sean Murphy-Bunting heads the secondary. Inconsistency has been the tale of the tape for the Bucs this season, and it showed even in the NFC championship.

Brady had an outstanding first half but threw three interceptions on three straight possessions in the second half. At times, the defense has looked dominant this season, but they’ve also had games in which they were picked apart. The secondary is the real issue with this defense, and that could ultimately be the downfall of this team in the Super Bowl.

The Chiefs are the best team in the NFL with the best player in the NFL in Patrick Mahomes. They’re even more loaded on offense than the Buccaneers. Travis Kelce, Tyreek Hill, Mecole Hardman, Clyde Edwards-Helaire and Le’Veon Bell lead this unstoppable offense. Mahomes and Co. have dismantled even the best defenses in the league with ease and are hoping to continue the same kind of production in the Super Bowl. The defense has been Kansas City’s problem for a few years but has looked better as of late. 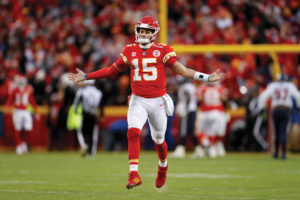 Patrick Mahomes and the Chiefs are looking to win back-to-back Super Bowls. Photo by Jeff Roberson

Tyrann Mathieu, Chris Jones, Frank Clark and Daniel Sorenson are the big names on this defense who continue to produce at a high clip. While their defense has been playing much better lately, their offense has staggered a bit down the stretch. They have relied too much on big plays downfield and haven’t had much of a running game. However, when you have Mahomes on your team, there isn’t much to worry about.

The team needs a balanced offensive attack and to limit the big plays, defensively. Fournette needs to run the ball consistently well to allow Brady enough time in the pocket to put the ball in his receivers’ hands while also limiting the turnovers. If Brady turns the ball over like he has this season, the offense will have little chance to succeed. On the other side of the ball, the defense needs to somehow limit the Kansas City offense from outrunning everyone on the field.

The team needs to continue the offensive production they’ve had all season and stop Fournette in the run game. Mahomes and the offense have toyed with defenses all year and should continue to do so against an inconsistent Bucs defense. Fournette is the X-factor in this game. If Kansas City stops Fournette, it will force Brady to throw more, which could lead to more of the bad decisions he’s made with the football this season.

The amount of talent that Kansas City has simply outmatches what Tampa Bay owns. Mahomes and the offense will light up the Tampa Bay defense in the first half while Brady and the Tampa Bay offense will fail to get any sort of rhythm going. The Chiefs will walk out of Tampa Bay with their second-straight Lombardi Trophy.