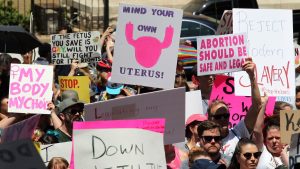 Photo of a pro-choice rally. Photo by Teen Vogue.

I am pro-life and I believe in the dignity of every human life. All life matters. Life begins at conception, which makes abortion a form of murder. Supporting abortion is to support taking the life of another human. Yes, women and men should have the right to their own body, but when you factor in the life of another human, the sole opinion of the female is not the only opinion that matters.

Conservative commentator Ben Shapiro destroys the argument that a fetus is not a human life during a September 2017 Q&A event at the University of California Berkley. “Why exactly do you think a first-trimester fetus has moral value?” said one student during the event.

There are people who are adults who are alive because of a pacemaker; they need some sort of outside force generating their heartbeat. Are you going to do it based on brain function? Okay, well, what about people who are in a coma? Should we just kill them?”

Abortion is not some doctor waving a magic wand. Abortion is not cute. Abortion is actually quite gruesome, especially the psychological effects it has on the mother after the procedure. A 2011 study published in the British Journal of Psychiatry reported that there were significant negative changes in the mental health of women who had an abortion.

Based off of medical information from the study of 164,000 out of 877,000 who had an abortion, women who have undergone an abortion were 81 percent more likely to experience a variety of mental health struggles.

A civilized society allows one human to harm or take the life another human. Why should abortion be any different? Abortion should not be used as another form of contraception in the case of an accidental pregnancy. One must be held accountable for their actions, and even in the case that it genuinely was not the mother’s fault for getting pregnant, that does not erase the child’s right to exist.

It is true that there are rare instances of rape and incest. U.S. Centers for Disease Control (CDC) reported in 2015 that only 1.5 percent of all abortions were due to rape or incest. Why should all abortion cases be held to that same standard if such a minuscule number was because of these cases? It should not.

Abortion should also not use American tax dollars to fund it. Abortion punishes the unborn child who committed no crime. Why should the unborn child face such extreme form of punishment, when it should be the perpetrator who should?

While I respect those who have opposing viewpoints, I think we should fix the adoption process rather than allow the killing of a human being.