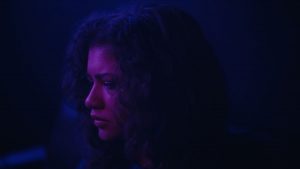 Zendaya stars in “Euphoria” only available on HBO. Photo by HBO and Vox.

Do you want to hear about another fantastic new series from HBO? “Euphoria” was produced by A24, the studio behind films like “Hereditary,” “Midsommar” and “Moonlight.”

“Euphoria” stars Zendaya, Hunter Schafer, Jacob Elordi, Sydney Sweeney, Barbie Ferreira, Angus Cloud, Alexa Demie and Algee Smith as high school students struggling from issues with drugs, sex, and alcohol. “Euphoria” is a graphic show that some might be uncomfortable with; however, it is very good and I do recommend it.

Rue (Zendaya) had just spent her summer at rehab after overdosing over the summer and has no intentions of staying clean. Jules (Schafer) is a transgender girl that just moved into town and is struggling to fit in. The two meet and swiftly become best friends. They are the main focus of the show, but the other students also have a great deal of depth to them, which is one of the best aspects of the show.

Each character is realistic and grounded. All the actors do a fantastic job portraying each of them and they really set the tone of the show. Each of the eight episodes begins with a cold open describing one of the characters lives up to the where the show takes place, and each one of them struggles with some major issues.

Zendaya’s Rue, Schafer’s Jules and Elordi’s Nate Jacobs are the three standouts for me. Zendaya has always been a talented actress in my opinion, and I thought she was pretty good in both of the Tom Holland “Spider-Man” movies, but this is the best she has ever been by far. This is Schafer’s first acting role, and for a first role Schafer knocked it so far out of the park. He managed to be one of the most fascinating characters on one of the best shows of the year and that is a great resume starter.

Finally, there’s Nate Jacobs, the jock. Jacobs is one of the scariest villains I have seen on TV in a while. He is a sociopathic, disturbed and abusive monster who controls the people in his life like puppets. I have to praise Elordi for his performance because I hated his guts the entire show. The best description of Jacobs is a modern day version of Billy from “Stranger Things” but more fleshed out.

The best part about Jacobs though is the audience can see exactly why he is doing the vile things he is doing and in a way understand them. While no one should condone his actions, there is some sympathy for a character clearly tormented by both his past and a struggle to discover his true self.

Another impressive feat that “Euphoria” pulled off that not many have been able to pull off, and none this well, is the way they convey this generation’s high school kids. The way social media, drugs and alcohol, pornography, relationships and life as a whole affect today’s high school and college kids are vastly different than what life was like five to six years ago.

The show also holds nothing back, like most HBO shows, and goes to the max with graphic, disturbing and completely messed up visuals and content that without a doubt only add to the overall experience. The dialogue is realistic, their struggles are grounded, and the entire show itself feels so grounded yet dreamy, if that makes sense. It is as if like one was on drugs, and that also comes from the incredible cinematography.

Marcell Rév, Drew Daniels, Adam Newport-Berra and André Chemetoff are the cinematographers. They deserve an Emmy, because while I loved the cinematography from “Chernobyl,” “Euphoria” has the best cinematography I have seen all year. It elevated the show ahead of everything else out there. The use of colors is also so vibrant and beautiful. Every shot is so detailed and stylized that my mouth was left wide open. There is one shot with Zendaya in the first episode were she the walls and the ceiling keep flipping as she walks, and it’s just astounding.

Drake was an executive producer on the show. I first heard about the show because I am a big fan of Drake like a lot of people around the world. I was curious to find out what brought him to be part of the show and what his role was like behind the scenes. He was only on set very rarely, and most of the cast did not meet him until the show wrapped, in which Drake hosted and paid for the wrap party. While it does not change my opinions of the show, I am curious to know what exactly his role was and how this show managed to have one of the most famous rappers in the world as an executive producer.

“Euphoria” is an incredible show that adds on to my list of reasons why HBO is vastly superior to Netflix in almost every aspect. It will not be for everyone, as the first episode will make a lot of people want to turn it off. I beg those people to finish the episode, and I guarantee they will want to continue watching. Sam Levinson is the show’s creator and directed five of the eight episodes, and I applaud him for creating something that really does understand today’s culture and taking it seriously. The show did get approved for a second season, but I hope they keep this going because I give “Euphoria” an A+.