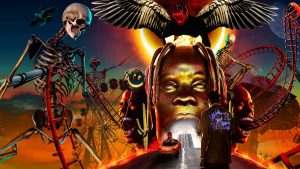 Travis Scott is one of the hottest names in the music industry today. He has had an unreal run of success since his debut album “Rodeo” dropped in 2015. Since then, he has released two more solo albums, including his widely successful, Grammy nominated “Astroworld.” In the mid-to-late 2010’s, Scott was one of the figureheads of trap rap. Scott also has one of the most intense fan bases in the music industry. Enthusiastic supporters of Scott’s work have paid insane prices for any piece of merchandise that has his fingerprints and name on it. When he released a special collection box of “Reeses Puffs” featuring a design he made, he managed to sell it online for $50. It was purchased within ten minutes and is now selling for $150 on eBay.

Travis recently gifted his fans a new documentary on Netflix titled “Travis Scott: Look Mom I Can Fly.” The documentary briefly covers his upbringing, but mostly focuses on the production of “Astroworld,” including its creation, release, tour, Grammy run and the Super Bowl performance of his hit song “Sicko Mode,” the most popular track from “Astroworld.” The documentary also covers the birth of his daughter, Stormi, with Kylie Jenner and his relationship with his family and fans.

I am not a diehard fan of Scott, but I do like his music. He seems like a cool dude with a unique sound, and he is definitely someone who cares about creating a memorable experience for his fans. Those experiences are what make up the bulk of this documentary, and result in being both the best but most redundant part of the film. These concerts will make people who are interested in Scott know how wild his shows are. From talking to people who went to the “Astroworld” show in Raleigh last year and from watching twitter videos of the concert, I have discovered that these shows are insane. They feature antics such as a roller coaster going over the audience and tons of pyrotechnics and lights, all of which Scott pays for. Fans dive into crowds every show, and massive mosh pits form. The insanity of the shows is clear throughout the documentary, and that point is easily made. In fact, the it’s made so frequently throughout that it becomes problematic for the documentary.

Every single time something from Scott’s personal life begins to unfold and peaks the viewer’s interest, the film cuts to the film cuts to loud music and a show. Scott had this film crew following him around for over a year, so there is definitely a variety of footage that could be used. We did not need to keep seeing more concert footage; regardless of how cool it looks. People who are not fans of Scott want to know more about him, not his fans’ behavior.

The positive points of the documentary did, however, ultimately shine through. Scott and director White Trash Tyler incorporate the trippy nature and sound of Scott’s music and the weird visuals of his music videos. The “Sicko Mode” music video is a perfect example of this.

The biggest flaw with the documentary is the lack of a clear vision. Is the documentary about “Astroworld?” Is it about Scott’s rise to superstardom? Is it about Stormi, Jenner and the rest of his family? Maybe it is all of those thing and the result is a film that lacks focus. I would not even call it a documentary. It’s more reminiscent of work done by a talented YouTuber who edited a vlog, and resulted in a compilation of random clips spread throughout.

“Look Mom I Can Fly” is something that Scott fans will love. It has already become the top trending movie on Netflix in only a couple of days and Scott fans love it. They are the audience this documentary was made for. If you are not a Scott fan and are just interested in knowing who he is this film will help you learn a little about him, but you will not learn about the appeal of Scott and what type of guy he is. I give “Travis Scott: Look Mom I Can Fly” a C-.