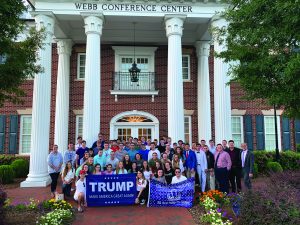 College Republicans take a group photo after a meeting. Photo by Jake Matthews.

The College Republicans are a political group on campus that is focused on bringing together HPU’s conservative community. Jake Matthews, the executive director of the HPU College Republicans shared a great deal of information on the organization and his role in it.

Matthews is a junior and political science major with a triple minor in gender studies, nonprofit management and civic responsibility and innovation. Matthews serves as an intern for North Carolina Congressman Mark Meadows. Additionally, he is a junior class officer and the electoral coordinator for Panthers for Israel. Jake was the chairman of the College Republicans before he became executive director.

Matthews has helped revive the club’s membership after the 2016 election. He explained that the club intends to maintain its increased ranks and host events to raise awareness of College Republicans. They plan to focus on educating their members about different policies.

Matthews says that he feels it is important to make sure that the members of the College Republicans are informed about the various policies going into effect in 2020. While the College Republicans do not have any events planned for the semester right now, they are working to become more active on social media and looking to host more events in the future.

Matthews says the GOP recognizes High Point University as an area for republicans. President Donald Trump visited HPU campus while campaigning for the 2016 election. Matthews says that one of his main goals is to get Trump to return to HPU, believing that this will help college republicans become more recognizable to the HPU community. They hope that the upcoming election year will help them grow membership.

“High Point was the only stop the GOP made at a college campus in their tour of North Carolina,” said Matthews. “We were honored to be recognized by them, and we hope this is the next step in getting Trump back on our campus.”

Matthews says that College Republicans want to foster a healthy bipartisan relationship with the student body as well as the other politically affiliated clubs on campus, such as College Democrats. Matthews explained that college campuses can be hostile during election season, and things can happen on both sides that only serve to needlessly divide the parties more.

When asked about the biggest political issue on campus that divided students, Matthews says that immigration is the most controversial topic. He said that it is important for each party to understand why the other feels so strongly about immigration.

Additionally, the issue is often responded to with ‘law and order,’ which can seem heartless at times. Matthews believes that the issue will need to be handled carefully with cohesive dialogue between different viewpoints.

College Republicans are looking to recruit new members of any year that are interested in learning more about political policies and the republican party going into the 2020 election. Matthews says that College Republicans is a key organization in the High Point community and is about more than just Trump.

Students wishing to join College Republicans are encouraged to contact them about their meeting times and location through HPU Connect. They can also be reached at their official email: thehpucr@gmail.com.