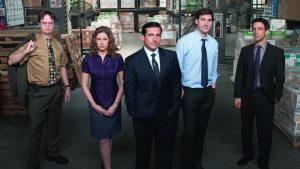 Everyone knows the famous first few notes to NBC’s hit American sitcom, “The Office.” If you have not heard of “The Office,” you must be living under a rock. This hit television show features the staff of Dunder-Mifflin, a paper company based in Scranton, Pennsylvania.

It tells the story about the characters’ lives and what it is like living inside the four walls of a boring office, all while dealing with the crazy manager, Michael Scott, played by Steve Carell.

The show first aired in 2005 and ended with its ninth season in 2013. The show received tons of awards, including 42 Em- mys, and skyrocketing reviews over the course of its airing. Other than its live television success, “The Office” obtained even more viewers from its online platforms. Episodes can now be seen on iTunes, Netflix and NBC.com, helping lead to the show’s sustained popularity for later generations.

Although the show has had immense success on its online platforms, NBCUniversal will be taking back the rights to “The Office” in January 2021. This means it will no longer be available on Netflix. This news was devastating for loyal fans because it is one of the most popular ways to watch their favorite show.

However, NBCU has some other plans up their sleeve. NBCU recently announced that they are trying to plan a reboot of “The Office.” The company believes that the reboot would be a great segway into its new slate of original series with their new streaming service, “Peacock,” while also keeping some of its roots with reboots from their most popular shows.

After this announcement was made, several of the show’s stars such as John Krasinski, Jenna Fischer, Angela Kinsey and Rainn Wilson all expressed their eagerness for this reboot to take place. However, there is one team player that may not be making a reappearance.

The star of the show, Steve Carell, might have already put his briefcase away back in 2013 when the original show ended. The reason that Carell is so apprehensive about this reboot is because of how it will go along in today’s culture. Some of the humor in the original scripts might be too “derogatory” or inappropriate for newer viewers today.

Although the social climate is different in comparison to how it was in the early 2000s, it is hard to imagine what the reboot would be like without one of its main characters.

“Steve should be in the reboot,” said Bogdahn. “To me, he was what made the show so special, unique and funny. To have him come back in for even a special appearance would be great. Some of the best moments in the TV show have to do with his interactions with the other characters.”

Many people agree with Bogdahn that Carell should come back for a second time around. It is evident on all social media platforms that without his appearance, the show would disappoint many and end in a major fall out.

Besides Carell’s possible absence, most fans are extremely excited about this potential reboot.

“I would love for NBC to do a reboot,” said HPU sophomore Kayla Baylock. “It is one of my favorite shows and pretty much the only show that I go back to rewatch. It would be awesome for them to do a reboot so that I have more seasons to watch. More seasons only means more Dwight jokes, Jim and Pam love, and crazy events amongst the rest of the gang.”

The talk of this potential reboot has been going on for years, but this time it might actually be happening. It will be exciting to see what NBCU’s new streaming service, “Peacock” will do with this potential new addition, hopefully bringing loyal Office watch- ers to their platform.