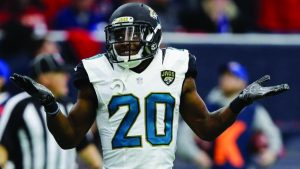 Jalen Ramsey is still looking for a way out of Jacksonville. Photo by foxnews.com 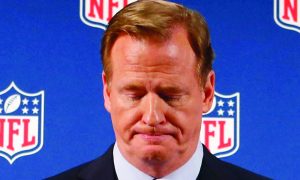 Roger Goodell, the unpopular commissioner, has a lot of work to do to fix the NFL. Photo by usatoday.com

The NFL is going through a time the likes of which it has never seen before. Players are holding out to get what they want. These superstars are showing their “courage” by missing out on seven, eight and even nine figure contracts. They will miss out on their fame and fortune for possibly six months. What a tough life,
right?

Players like Le’veon Bell, Antonio Brown, Jalen Ramsey and Ezekiel Elliott are just a few of the rising players who have made headlines. Each athlete has played a substantial role in their respective team’s performance, and their absence has proved a notable impact on each team’s success.

Bell sat out the entire 2018 season because he did not get the contract he wanted. He had to manage on the $12.1 million franchise tender the Steelers offered him in 2017, rather than the $15 million a year he wanted. He took the 2018 season to presumably workout and condition. He hit free agency in the end of 2018 with a mission: Get the money he wanted.

He went on to sign a four-year contract with the New York Jets worth $52 million. Yes, that is $13 million a year, meaning he seems to have given up on the entire reason he sat out in 2018. Brown also began the 2019 season by refusing to play in hopes of better pay. His holdout was unprecedented and resulted in him bouncing from team to team. After a recent controversy that led to his dismissal from the New England Patriots, Brown now labels himself as “retired.”

Elliott waited until one day before the season started to sign a deal, and he definitely got what he wanted. He got a six-year contract and a $90 million extension with a max of $103 million. $103 million is an insane amount to pay a football player in general, but even more so for a running back like Elliott. This will make him the highest paid running back ever with a possible yearly contract of over $17 million.

Ramsey decided to follow the others’ lead, because why not? Let’s add another player to the circus act. His scheme is ongoing though, which is better. He currently “plays” for the Jacksonville Jaguars and he has demanded a trade. Emphasis on “demanded” since it shows his loss of the respect for the franchise. He calls himself “a top corner in this league.” He is already a two-time Pro Bowler and got his first All-Pro honor in 2017. He has nine career interceptions and zero fumble recoveries.

I am predicting that this will last easily until their Week 10 bye week.Imagine if this happened in baseball. Super agent Scott Boras is a little bit of an offender to this, but nothing near the level of these NFL players. Nine of the top ten largest professional sports contracts are owned by MLB players, but they do not talk about how they lost respect for their club, nor are they sitting out a season to get what they want. That is because most athletes know better, but not those in the NFL.

Football is the most popular sport in America without a doubt. The sport garners a lot of media coverage and exposure. ESPN and other sports networks will cast a spotlight on this ongoing issue. It draws people in and fans like you and I have so many questions. What would we do with $100 million? If anyone wants to leave their nine-to-five job and look for an eight or nine million per year contract. Let me know how that works. Most people do not have a company worth hundreds of billions backing them the way these players do.

The NFL has a serious problem, and their incredibly unpopular commissioner Roger Goodell is useless. He consistently gets booed at stadiums, draft and any other time he is shown to a football fan. Does the NFL really want this to be projected to their fans, especially the young kids who dream of going pro? They have enough problems on their hands. They are constantly being questioned about the safety of the game, and they frequently have to worry about how their players are portraying the league. Selfish players are likely not an additional factor they want to deal with right now.

Here is a message to the NFL from us fans: figure it out ASAP, because we just want football, not a reality television show with athletes.