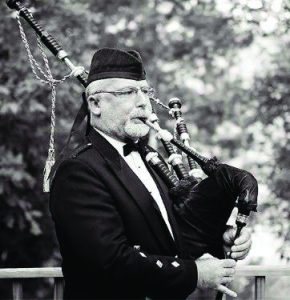 Dr. Stuart Davidson has played pipes since he was 11 years old. Photo submitted 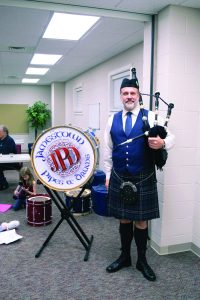 Dr. Oliver Stoutner is a member of JPD. Photo by Breanne Valentine 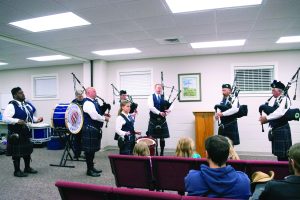 Band members demonstrated techniques of piping and drumming with performances of their repertoire. Photo by Breanne Valentine

Jamestown Pipes and Drums hosted an open house on Nov. 14 at Jamestown United Methodist Church, inviting the public to learn about their organization, ask questions and see what piping and drumming are all about.

Kyle Auman, Pipe Major of JPD and band director at Wesleyan Christian Academy’s high school, welcomed visitors with an overview of the band’s history, community involvement and what to expect from the open house. The band, Auman explained, was established as a “feeder band.” This means that once new players achieved a certain level of proficiency, they could advance in ranks and play with the higher-level band.

“I am one of the founding members,” said Auman. “The band started nearly 20 years ago in my basement with about five pipers and a bunch of seventh grade drummers. I was playing with Grandfather Mountain Highlanders Pipe Band at the time, and we were trying to start a ‘feeder band.’ All the students were down here, so we took the students I had, the students from Charles Hatley and the students from Andy Maness, and we started playing.

I was the band director at Northwest Guilford at the time, and I asked some of the talented seventh grade drummers there if they were interested in learning how to play Scottish drums in a bagpipe band. They played for two or three years, got older, and moved on.”

Meanwhile, the band continued to bring in more members; however, it became apparent that geography was a disadvantage to the newly formed “feeder band” for the Grandfather organization. Thus, the members thought it best to separate themselves, becoming the Jamestown Pipes and Drums.

The band’s mission statement is “to educate the population of the Triad and beyond, to the rich Scottish history of North Carolina through the use of the Great Highland bagpipes and Scottish drums.”

“We are a competition band that travels throughout the Southeast to Highland games, festivals and parades,” Auman said, elaborating on the band’s mission. “We are also a teaching band and invite all who are interested to contact us about learning to play the bagpipe or the drum. If you have always wanted to learn, we can teach you.”

He discussed the band’s tartan, and members demonstrated the various techniques used to play Scottish drums such as the snare, tenor and bass drum. Practice chanters and instructional books were available for purchase to use with a free lesson for anyone who wanted to try piping. Sticks and instructional books were also available with a free drumming lesson.

For several years, JPD has represented High Point University’s culture, as they play at every Commencement and Convocation. Two HPU professors are also JPD pipers, Dr. Stuart Davidson, adjunct professor for the mathematics department, and Dr. Oliver Stoutner, director of Business Fellows and assistant professor of management. Campus Chronicle spoke with both professors about their history with bagpiping, their membership with the band and what it all means to them.

Born and raised in Lockerbie, Scotland, Davidson began playing pipes in his early childhood. He, too, was one of the original members of JPD and recalls practicing in Auman’s basement. He is currently the Pipe Major of JPD’s Grade 4 band.

“I started playing the pipes in 1973 when I was 11 years old, but I gave it up in 1979 because I was a bit more into sport and thought I could make a go of it as a professional footballer,” said Davidson. “As it turned out, that never happened. I came to the U.S. to further my education and eventually started back piping in 1996. I have been playing ever since.”

His mother also played the pipes and competed in Highland Dancing when she was a young girl. “My parents thought I should be the one in the family to take it up…so I did,” said Davidson.

When asked what being a part of JPD means to him, Davidson said, “Playing with the band gives me a much-needed release from day-to-day work. It is a physical activity and one that we do with close friends. The sense of community and fellowship is strong in the band. It is a large part of my life.”

His happiest memories that involve playing his pipes, he recalled, are performing at the weddings of his band mates’ and their children.

Stoutner is a student of Davidson’s and has been playing the pipes for six months, although, he spent a year and a half practicing on a chanter. This is an essential step for learning embellishments and reading music before transitioning to the bagpipe. He has been playing in JPD’s Grade 5 competition band since October of this year.

“Making music with a group of committed friends is one of the most inspiring things anyone can do,” said Stoutner. “JPD provides a fun and supportive environment for newcomers and experienced players alike. That I get to share these moments with my eldest daughter makes them all the richer.”

One of his happiest memories of playing his pipes is when he participated in last month’s Scotland County Highland Games.

“It was my first time playing with the band,” Stoutner said. “Being a part of the opening massed bands ceremony where more than a hundred pipers and drummers, from bands all over the Southeast, form up and play Scotland the Brave, while all of the clans march in, is pretty special. The noise is incredible.”

For those interested in trying out Scottish piping or drumming, Stoutner says, “Go for it. Playing the pipes is one of the hardest things I have ever attempted, but also extremely rewarding.”

“Speak to someone,” said Davidson. “Ask questions. Pipers and drummers want nothing more than to share what they know with others.”

Those with questions and curiosity are encouraged to visit JPD’s weekly practice at Jamestown United Methodist Church on 403 East Main Street. Practices are every Thursday from 7-8:30 p.m., with free lessons available from 6-6:30 p.m..