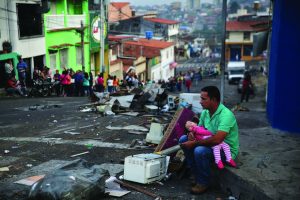 Venezuela is one country that has attempted to implement socialism, and as a result the economy has been devastated. Many are living in poverty and are unable to find stable jobs to feed their families due to the instability it causes. Photo by U.S. News and World Report

Ah yes, socialism. Imagine: free college, free healthcare or even basic universal income. Doesn’t that sound absolutely amazing? Quite frankly, no. Nothing is free, nor is such a thing attainable.

The only way for such a thing to be the case would be to implement substantially higher taxes and dismantle the United States Constitution that our Founding Fathers vigorously worked on for our nation. Socialism only works until you run out of other people’s money.

By definition, socialism is a political and economic theory of social organization which advocates that the means of production, distribution and exchange should be owned and regulated by the community as a whole.

In other words, the government acts like an omnipresent guiding force that alleviates all of one’s social ills. Where is the incentive to work hard in this scenario? Where is the American Dream?

Socialism emerged as a response to capitalism. Whereas capitalism is based on a free market system and private ownership, socialism is based upon the idea of public ownership. This concept of having a social safety net is yet another fault of the far left. I fear that if Trump fails to win the 2020 election, socialism will overtake the U.S. government.

According to the CATO Institute, a Libertarian-aligned think tank that funds social policy research, 57% of Democrats and 51% of young people have a positive view of socialism, but do they know what socialism actually is? Socialism does not have the best track record in countries like the Soviet Union and Venezuela.

The CATO Institute reports that within these socialist countries, there is hunger, authoritarianism and low economic growth. It is no wonder that people risk their lives to flee these nations.

Gallup found that 67% of Americans believed that big government was a bigger threat to the future than big business was. Simply put, socialism believes in a big government, which is a steep contrast to what is currently in place.

Socialism is based upon feelings and fantasy. It gives individuals empty promises and false expectations. It promises material abundance to people; however, capitalism has been proven to do this more effectively than it ever could.

In recent years, socialists focus on a questionable sense of “equality” through government interference. I raise many red flags with the idea of taking from the rich and giving to the poor. The logistics of it are not feasible.

“The standard agenda favored by most Democratic Socialists is single-payer health care, universal free college and a guaranteed federal job for anyone who wants one, would cost some $42.5 trillion over a 10-year period. ” reports a Reason article. “This would nearly double current federal spending levels.”

The aforementioned article also points out that federal government spending would rise from its current level of about 20% of GDP to 35-40% or more.

Modern socialists advocate for a $15 minimum wage, increased regulation of labor, more environmentally based restrictions, greater regulation of media and increased protections for foreign goods. Those who are in support of the aforementioned facets of socialism get much of their information on social media platforms and the biased media outlets.

People fail to realize that socialism causes shortages. A report from the National Review explains that in the socialist nation of Venezuela, there is no meat, medicine, flour or reliable electricity.

How are Americans so blind to the negative faults of socialism? Are they that ignorant?

This same issue in Venezuela is the same in North Korea. Toilet paper is scarce, as well as other basic amenities. The United States will never and can never be ruled under a socialist government. Thank God for President Donald Trump reaffirming this such issue.

One of my main issues with socialism is the idea of universal health care. Universal health care systems often have long wait times for procedures, force healthy individuals to pay for others’ medical care and discourage others to become medical professionals.

The cost alone for a universal healthcare system would be a huge expense for the U.S. government, not to mention result in a steep increase in the debt.

As mentioned, doctors have less of an incentive to become medical professionals if he or she isn’t well paid. An article published by The Balance mentions that doctors might spend less time per patient to keep their costs down. Additionally, a universal health care system means there is less funding for new life-saving technologies.

What does the United States look like now? There is a mixture of both government- run and private insurance. Currently, 60% of citizens get private insurance from their employers. Yes, while there are 28 million Americans who have no coverage, this does not mean that a universal income would be the answer to the problem.

Medicare is already costing the country $675 billion on an annual basis, and Medicaid is costing $574.2 billion per year. That is approximately $1.25 trillion a year.

Imagine your taxes going up by 62% so that you can have government-funded health insurance. Do you want that? The problem is that many fail to recognize this issue. Those who are in support of a socialist government want free handouts without realizing the sheer cost of such a thing.

Wake up, America. Work for what you want in life.