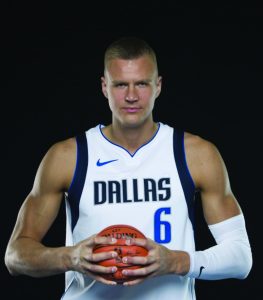 Porzingis ended up with 20 points vs. the Knicks, but lost. Photo by Sportsnaut

Kristaps Porzingis made his return to New York for the first time since being traded last spring. Porzingis was picked fourth overall by the Knicks in the 2015 NBA draft.

He was traded to the Dallas Mavericks when he expressed his displeasure for how the organization was preparing for the future. More specifically, he disliked the work of Owner James Dolan and President Steve Mills.

When Porzingis was announced in the pre- game starting lineups, he was serenaded with loud, passionate boos. Throughout the game, whenever he touched the ball, the Madison Square Garden crowd would chant obscenities at the 7’3″ star.

The Knicks got their revenge though in his return. Forward Marcus Morris Sr. hit a 3-pointer with 13.2 seconds left to give the Knicks the 106-103 win.

The Mavericks fall to a record of 6-5 while the Knicks are now 3-9.