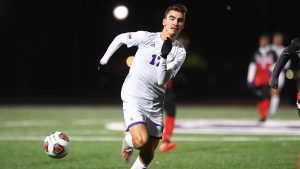 The number two ranked Panthers are moving on to the Big South Championship game. The men’s soccer team beat Gardner-Webb University 3-2 Wednesday night in the Big South Semi-Finals. This will be HPU’s fifth appearance in the championship in program history.

Senior forward Ilias Kosmidis started the scoring off early when his shot passed by GWU’s goalie Daniel Husa 12 minutes into the match. He was assisted by fellow senior Josh Baker.

Not too shortly after, Gardner-Webb answered with their own score. 28 minutes into the first half, when GWU junior Abel Gebrekiros scored.

HPU did not take much time to take the lead back. Just over a minute later, Kosmidis scored his second goal of the game, putting the Panthers up 2-1.

Just under a minute into the second half, Gebrekiros earned his second goal of the game, tying the score at 2-2. The momentum was surely on their side and it looked like it was going to stay that way for the rest of the game.

Alex Abril, a Sophomore mid-fielder, came to the rescue though. In the 75th minute, he found a clear path for a shot and took it. He scored to put the Panthers up 3-2, and the score would remain like this for the rest of the game.

Ilias Kosmidis led the team in shots with five and goals with two. Goalie Keegan Meyer, a senior, had seven saves throughout the game.

HPU was the second seed for the Big South Tournament. They finished the 2019 regular season with a record of 13-6 and a 7-1 conference record. There season was highlighted by a 1-0 win at Duke in late October and won six of their last seven regular season games.

Kosmidis led the team with eight goals this season and Abril followed him with five of his own. Meyer ended the season with a 1.15 goals against average.

The Panthers have a tough test ahead of them though. They will play the Campbell Camels who finished their season 15-2.

They beat HPU 2-1 in their contest this season. They have junior Thibaut Jacquel who is the Big South Conference’s leader in goals with 16 for the season. He has five games where he scored two or more goals and had a hat-trick against Presbyterian in early October.

Their goalie Sam Lechuga, a junior with a goals against average of .69. He also had 10 shutouts in 2019. In their semi-final win against Presbyterian, Jacquel scored and Lechuga had a shutout in the process.

Although this is the Panther’s fifth appearance in the Big South Championship, they are still looking for their first championship.