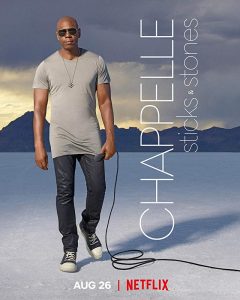 Netflix has just released Dave Chappelle’s third comedy special on its platform, entitled “Sticks & Stones.” Chappelle’s latest stand up special contains more of the same boundary-pushing and politically incorrect humor that has made him one of the most popular comedians of the past few decades. This special was largely a ramble on current political and social issues through a comedic lens.

Chappelle treats topics such as the LGBTQ community, abortion, and the #MeToo movement with a level of irreverence that is bound to be controversial in today’s politically and socially divided landscape. Vice News, a left leaning news publication, has called this special both misogynistic and transphobic, while fans have praised his willingness to not allow political correctness to dictate what can and cannot be said in a comedic setting. “Sticks & Stones” begs the question, is comedy inherently political?

I am a big fan of Chappelle’s previous works and his personal brand of profanity laced “anti-woke” humor. I respect his willingness to take on issues that many other comedians are afraid to touch on for fear of coming across as offensive or crude. His relaxed yet confident demeanor allows him more leeway in making light of taboo subjects such as racism and suicide.

Comedy can be an effective way of discussing issues and topics that people are discouraged or even forbidden from talking about. Chappelle and other comedians can make people laugh about issues because they give voice to thoughts that many have but are unable to fully express. Comedians are able to disrupt the powerful force that political correctness has become, and therefore, it is no surprise that many news outlets are calling this special offensive for a variety of reasons.

Comedy should provoke, push boundaries and teeter on the edge of what is right and wrong. Chappelle has successfully baited these publications into proving his point that people have become too sensitive and PC culture is out of touch with many Americans.

Chappelle made a variety of controversial jokes during this special, raising skepticism over the honesty of Michael Jackson’s accusers, calling the LGBTQ community the alphabet people, and defending Kevin Hart’s controversial tweets. It is unclear to what extent Chappelle truly believes what he is saying, or if he is just saying outrageous things to be funny. Chappelle was able to push boundaries on what is acceptable discourse without it being forced or edgy just for the sake of being offensive.

Chappelle sought to cancel “cancel” culture, lamenting the recent trend of ruining celebrities’ careers for comments or tweets they made decades prior. He defended his friend Hart from the controversy regarding tweets he made that prevented him from hosting the Oscars. The major theme of the special was a criticism of modern pop culture and how sensitive it has become to minor offenses.

Dave Chappelle continues to defy the rules of engagement regarding what can and cannot be said in today’s political and social climate. His brand of comedy is as relevant as ever in a time where many feel political correctness has stifled comedic expression. “Sticks & Stones” was consistently funny throughout its just over an hour of runtime, and had a few particular laugh-out-loud moments. I saw this special as a defense of comedy in a culture that has placed restrictions on what can and cannot be joked about.

I would recommend it to anyone who enjoys comedy and is not easily offended. Also, if you continue watching past the credits, there is a hidden 20 minute segment where Chappelle takes questions from an audience. Chappelle answers a variety of questions, talks about the time he met former President Barack Obama, and offers a warning that President Donald Trump has a better chance of being re-elected than many people seem to be giving him. My Rating for “Sticks & Stones” is an A.