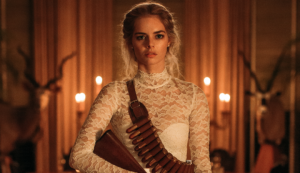 Samara Weaving as Grace in “Ready or Not” now playing in theaters. Photo by Indie Wire

Directed by Matt Bettinelli-Olpin and Tyler Gillett, ‘”Ready or Not” tells the story of the worst possible interaction with the in-laws a person could have. Its cast includes Samara Weaving, Adam Brody and Mark O’Brien to name a few. The story follows Grace (Weaving) on her wedding day when she marries into the Le Domas family, a wealthy family that built its fortune from the board game industry.

If you have read any of my past reviews, you know I am a big fan of the horror genre. I have never written reviews for comedies because few good comedies are released these days. Comedies can be difficult to review because what one finds funny is based on their own sense of humor. I can only review the aspects of the filmmaking. While this is not a full-on comedy. It is a horror/dark comedy film; there are still elements that are difficult to review critically. Thankfully, the movie was quite good.

The production design is fantastic. The producers nailed the design of the old Victorian mansion that houses the crazy family, featuring mostly candle lit hallways, dumbwaiters, hidden passageways and tunnels. This house is exactly what I would imagine a violent version “Clue.” to take place in. I would call “Ready or Not” adult “Clue,” but there is another movie coming out this year called “Knives Out” that fits the description better.

Switching over to the acting, Weaving is phenomenal. She treats this entire situation as an actual human being would, and her reactions to this wild situation she found herself in are great. The rest of the family is also really funny, because they need to kill her for supernatural reasons and she keeps getting away.

Their reactions as they continue to lose control of the situation and get bested by one person are genuinely funny. Another amusing thing as that not all of the characters are experienced with Victorian weaponry. As a result they screw up and get yelled at by everyone. Their failures are hilarious.

The movie is also very intense whenever it follows Grace as she escapes these family members because the film mainly carries a serious tone when it follows her perspective. Throughout it all the viewers are still rooting for her to succeed. She has to go through some brutal hardships throughout the film that makes us root for her more. At one point in the film, she falls into a basement pit and she has to crawl out. There is way more to it than that but for the sake of spoilers I will not go into great detail.

One issue I have with the characters is that their motivations continue to switch for unknown reasons throughout the film, and it becomes annoying. One character has to commit an act and then abruptly decides he cannot. Then, he has to again and then once again cannot. Another character tries to the right thing thing until he gets an opportunity to, then he suddenly has malicious intent. When a film keeps switching the characters motivations without justification, the audience starts to become lost and confused.

It is bad writing because normal people do not have these irrational changes in personality multiple times throughout one night. However, I have never had my in-laws trying to murder me to please a demon, so I might have no idea what I am talking about.