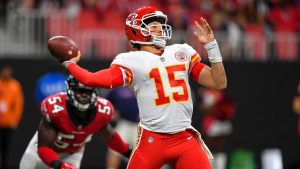 Believe it or not, it is possibly for a championship trophy to go to Kansas. This year, the Chiefs are going to be the team to beat. Patrick Mahomes will be the MVP, he will repeat his over 50 touchdowns and have 5,000 passing yards.

His consistently high-quality performance proves this. Travis Kelce is going to have some key catches throughout the season if the Chiefs want to win. The Saints are of course not a team to overlook. Drew Brees is on the same level as Mahomes. He will use Alvin Kamara and the rest of his talented offense to make it to the NFC Championship. It will be a tough route as the Eagles look strong and the Cowboys are trying to rith the ship. I predict that the Saints offense will score over 500 points, and their defense will surprise the league.

Despite all of the competing teams’ greatness, the Chiefs will still come out victorious. They are the most well-rounded team in the league. They have a cohesive unit on offense, and their defense is good enough that they can preserve a 20+ point lead that they will find frequently this year.

Feb. 2, 2020 in Miami, Florida, you will find some Kansas City boys playing a team not too far away up the coast. The game will be full of offensive firepower. South Beach is going to be loud, and the sound from the ArrowHead Stadium atmosphere will travel well. The Chiefs, with their talented and synergistic team are going to win this game. Before the halftime show, the momentum will have already gone their way.

Should this turn out to be true, there will be a Super Bowl parade downtown for the first time since 2015 when the Royals won. This time it will be different, as the fans will be decked out in red and giving the tomahawk chop for days to come.

It has been 50 years since the Chiefs last Super Bowl win. They won 23-7 against the Minnesota Vikings at Super Bowl 4 in 1970. They played the game in New Orleans back then, and now they are going to beat them.