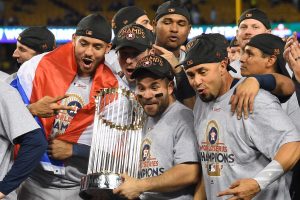 The Houston Astros won their franchise’s first ever World Series in 2017, but what will happen to that after a new investigation? Photo by SB Nation.

The Houston Astros have been the center of the baseball world recently for the accusations of cheating during the 2017 season. More specifically, the legitimacy of their American League Championship Series matches is being called into question.

Former athletes and members of the Astros organization have come out in recent days to expose the team’s and explain their tactics and explain how they would “cheat” during a game.

In baseball, the catcher gives signs to the pitcher on what pitch to throw. They do it through multiple numbers or actions signaled with their hands. They have become more and more intricate as the sport gets more strategic. It is a common tactic for players to try and “steal” the signs from the catcher. By watching the catcher and relating it to what pitch they throw, players can figure out what the signs mean.

This can give a substantial advantage, especially in a sport that has winners determined by a few inches. Being on the field or in the dugout trying to decipher the signs has been part of the game for a while, but the Astros took it too far.

There is a difference between gamesmanship and cheating. The Astros have been accused of setting up a camera in center-field aimed directly at the catcher to try and see their signs with the same view a player would have. Then that footage was instantaneously fed to a monitor in the runway between the dugout and the clubhouse. A player or coach would watch the feed and decipher the signs.

Once they got the signs, they would bang a trash can if it was an off-speed pitch or remain silent when it was a fastball. They did it loud enough where the hitter up to bat could hear it. If you watch highlight clips from that series against New York, it becomes blatantly obvious.

One element that shouldn’t be overlooked is the fact that the Astros could only do this at their home stadium. Home field advantage is already a major element for a team in a seven game series. The Astros had nine home games during the 2017 playoffs and they won eight of them. The most important being game seven against the Yankees which they won. It was this win that put them into the World Series.

The difference between gamesmanship and cheating in this case is simple. When you add in the element of technology, then it is cheating. As I mentioned earlier, being a player and using your intelligence is part of the game and is fine, but when you are paying someone to film and using a camera, that is cheating.

This problem could not just affect the outcome of a game, but the career of a pitcher. This advantage gives hitters a better chance at hitting, and hits lead to runs followed by wins. If you are a young pitcher and your stats are not at the major league level due to this cheating, then you can be sent down to the minor leagues where the pay is lower. Most people who go down do not get called up again.

In an interview with The Athletic, ex-pitcher Mike Fiers expressed his concern about how these types of situations can hurt the game.

“I just want the game to be cleaned up a little bit because there are guys who are losing their jobs because they’re going in there not knowing,” said Fiers. “Young guys getting hit around in the first couple of innings starting a game, and then they get sent down. It’s ruining jobs for younger guys.”

Fiers, being a pitcher himself, knows the struggle and work that one has to put in to be successful in a game where players are constantly getting better. Fiers has had a successful career, with 69 career wins and an ERA of 4.02. He just finished his ninth year with the Oakland Athletics in 2019, going 15-4 with an ERA of 3.90. He is one of the more consistent pitchers in the league and is a solid addition both on and off the field for any team.

There have been many accusations of teams stealing signs in the past, but nothing of this caliber. Ex-players and faculty have never come out against a team in this way before. That is one of the reasons why this situation may be much more serious than previous allegations of cheating.

The MLB has begun an investigation into the Astros and their 2017 playoff run which led to them winning a World Series. The MLB officials intend to interview Boston Red Sox Manager Alex Cora, new New York Mets Manager Carlos Beltran and Astros Manager AJ Hinch. All three of them were a part of the 2017 team. The MLB is not stopping the investigation there however. There are plans to interview anyone from players to coaches and even team executives.

In January of 2017, the St. Louis Cardinals were fined $2 million and lost two top draft picks for stealing scouting information from the Astros front office. During the 2019 American League Championship Series, the Astros and Yankees met again. Although home field advantage did not end up being as big of a factor this time around, the Yankees inquired to MLB commissioner Rob Manfred as they heard “whistling” from the Astros dugout in Game 1. This shows that the Astros have a history of being charged as cheaters for using this method before.

Cases of cheating in playoffs have occurred at both the college and professional level. Most result in hefty fines to the club, but some have ended in voids of championships and forfeiting of seasons.

All decisions on investigations and consequences have to go through commissioner Manfred. His decision will be interesting, as anything could happen. But what is the future for the Houston Astros?