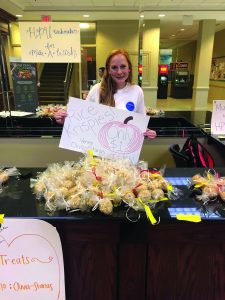 The HPU Wishmakers aspire to raise enough funds to grant a child’s wish in the Triad area. “Wish Week” took place from Nov. 4 to Nov. 9 and was a week full of fundraising efforts for Make-a-Wish. Throughout the week, the club hosted an online giving campaign through a link and on social media, but there were also several specialized events.

President of the HPU Wishmakers, Kimberly Kupress, said, “HPU Wishmakers is still a growing club. We have only been a club for three years. I am beyond thankful for the club members who open their hearts and volunteer to grant a child a wish.”

The week started on Monday with a bake sale at the Slane Philanthropy tables. Members of the club sold cookies and cupcakes to students and faculty.

On Tuesday, HPU Wishmakers held a “give-back night” at the local Chipotle where a percentage of sales would go toward the club’s fundraising.

This was followed by another “give-back night” on Wednesday. Feeny’s Frozen Yogurt gave a percentage of its sales to the fundraising effort. Members of the club also accepted donations at the Slane philanthropy tables. Anyone who donated got to write their name on a Make-a-Wish star that went on the wall.

The theme on Thursday was “Kisses for Wishes” where anyone could buy a bag of Hersey’s kisses to be delivered to someone else.

On Friday, members of HPU Wishmakers had a table in the Greek Village selling Domino’s pizza, with the proceeds being added to the donation pool.

The main event that was promoted all week long was a yoga event on Saturday. All week, people could sign up for $5 to attend the yoga event where they could do yoga and receive Krispy Kreme donuts.

“It was so amazing to see the campus come together to support an organization as impactful as Make-a-Wish,” said Heather Simmons, the service trip coordinator of HPU Wishmakers. “There were so many people who had busy days, but chose to take the time to support us.”

“This was our first wish week, and I would say it was a huge success,” said Kupress. “We raised a large amount. This week was so important to me because I wanted to leave the club with something to continue in the future.”

In the future, the HPU Wishmakers plan to be able to raise enough funds during Wish Week to grant a child their wish by the end of the week.

Students interested in joining the HPU Wishmakers or learning what else the club is involved in, can reach out to the Kupress at kkupres@highpoint.edu.