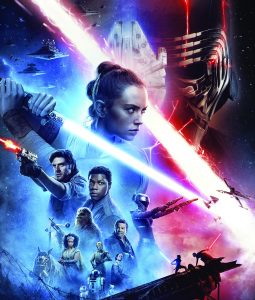 “Starwars: The Rise of Skywalker” Premiers in theaters December 20th, 2019. Photo By Idmb

Star Wars: The Rise of Skywalker” is the final installment of the Star Wars sequel trilogy. Since the trailer dropped in April, Star Wars fans have been anxiously awaiting the Episode IX release in December. Be wary readers, as from this point on, spoilers abroad.

The name itself brings many questions. After the apparent death of Luke in “The Last Jedi” and the death of the actress Carrie Fisher who played Princess Leia, fans are swarming with theories on who the Rising Skywalker is. Since “Star Wars: The Force Awakens,” there has been mass speculation on if any of the characters were Luke’s child. Signs are pointing to an answer in the upcoming movie.

J.J Abrams, who directed “The Force Awakens,” is directing Episode IX and co-wrote the script alongside Chris Terrio. When E!News asked about writing and directing the concluding movie, Abrams had a lot to say.

“This is about bringing this thing to a close in a way that is emotional and meaningful and also satisfying in terms of actually answering [as many] questions as possible,” Abrams said. “So if years from now, someone’s watching these movies, all nine of them, they’re watching a story that is as cohesive as possible.”

While we do not have too much to go off of what Episode IX will be about, we do know there will be a year time jump between ‘The Last Jedi” and “The Rise of Skywalker.” Also, from the trailer we have seen the destroyed death star, something that may be a new super weapon and the appearance of the Knights of Ren.

One thing is for certain though, and that is we will be seeing the return of characters from the newest Star Wars trilogy. Rey who has been at the forefront throughout the entirety of this new trilogy and just became aware of her force powers after the events of the previous movies. But what got fans in a frenzy is that last shot from the trailer that has her wielding the double-bladed red lightsaber, which many are pointing out is more characteristic of the sith and other villainous force users. Tidal waves of theories are pouring in, from her having a clone to her shifting to the dark side. Passionate fans are waiting in anticipation for the answers only the movie can bring.

Fin’s storyline is one that fans are curious about. Transitioning from brainwashed stormtrooper to a valiant and brave resistance fighter, Finn’s arch has been all his own throughout the trilogy. At the end of the last Jedi, we see Finn find his place in the resistance, and with new footage showed him fighting alongside a new character, Jannah. Another important rebel people are eager to see is Poe Dameron. It appears that he will continue his journey to become a prominent leader.

Another character with an unresolved story arc is the apparent antagonist Kylo Ren. Since he killed all three of his father figures, Han, Luke and Snoke, his character has a lot of room to grow. Due to his parallels to Dark Vader, many people are assuming a somewhat redemption arch is being set up with his conflicting feelings about the dark side of the force. But there is something to be said about the end of “The Last Jedi” when Kylo Ren begged Rey to join him in the founding of something entirely new, rather than a light side or dark side.

Adam Driver, the actor who plays Kylo Ren, stated in a “Dateline” interview that he has known for a while the way the story was going to end for his character.

He was quoted saying, “I think with Star Wars, it’s six years this year that I’ve known about it or been working on it…I had one piece of information of where it was all going, and that’s where it has been in my head for a long time, and things were building towards that.”

With Dec. 20 not too far on the horizon, fans of the trilogy are on the edge of their seats as they wait for the final installment of the Skywalker saga. After the arrival of Episode IX in theaters, it appears Disney will be taking a break from producing Star Wars films, but they still have plans for more content about the galaxy far far away, such as the “Mandalorian” show. There are also plans for a new Star Wars movie created by David Benioff and D.B. Weiss, the showrunners of “Game of Thrones,” which is intended to be released in 2022.