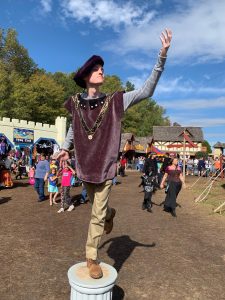 Knights, wizards and princesses gather, because the Carolina Renaissance Festival and Artisan Marketplace has begun. Every Saturday and Sunday from Oct. 5 to Nov. 24 are opportunities for guests to immerse themselves in a fantastical medieval setting.

It is located at 16445 Poplar Tent Road in the town of Huntersville, and will be continuing until Nov. 25. This is quite a drive from High Point, but it is well worth it, especially for those who carpool with their friends.

A group of friends and I from the HPU Tabletop Roleplaying Game Club, or TTRPG for short, got together to attend the fair, and we all had a fantastic experience. When we arrived, we were surprised to see the effort that had gone into creating a medieval town. Of course there were silly, amusement park aspects such as shops that sold furry wolf tails, but there were more genuinely impressive parts.

“The food, atmosphere, and the people were all great,” said Alex Wirth, an HPU junior who visited the fairgrounds. “I could not help but imagine I was back in the time of knights.”

The Artisan Marketplace was full of talented crafters. Visitors got to watch as experts made handmade works of jewelry, pottery and blacksmithing. Custom sculptures of impressive quality were on display, as were handcrafted dresses and cloaks. A smith even guided some guests in the creation of their own souvenirs within the crackling flames of the forge.

Unique activities were spread throughout the fairgrounds. An archery range allows guests to loose a volley of arrows at an array of target’s competing with their friends for points. A similar booth also had small model catapults, which young children used to launch small projectiles from across the fair. Additionally, there were multiple rides and a rock-climbing wall to enjoy.

Several stages were set up that hosted various performers, including comedians, improv actors and musicians. Traditional folk music and timely jokes echoed throughout the fair as people walked by.

The main feature of the fair was the joust, where two teams of knights faced off in a competition to measure their equestrian skills and horsemanship. All is not as it seems during the jousts though, as it is coupled by a simple plot that runs one layer deeper than just an athletic competition. This results in an exciting sword fight between the two knights.

These elements worked together to create an experience that many found to be unforgettable.

“It’s awesome getting to see all the people in costume, hear the amazing music and blow some money on some cool things,” said Ronan Kohl, an HPU graduate student. “The best part is getting to share all of it with nerdy friends.”

If there was one thing that truly made the fair unforgettable, it was the other attendees. My group encountered all manner of amusing individuals. People cosplayed as everything from simple peasants, to celtic druids and even giant trees. Non-staff festival goers had a multitude of amusing interactions with one another.

Josh Shrogen, an HPU junior, would go around jokingly threatening staff and visitors alike with a pair of tongs. They took it in good spirits, with some dueling him and others surrendering to him.

When asked why he did this, he responded in character saying, “Well you see, it all started with this annoying goose. Me and this goose have been at it for years. I, armed with my mighty weapon, the tongs of smiting, set out on a quest to take over his home.”

It goes to show that it was a fairly wild event, with the setting giving people the freedom to be a little silly and engage in some good humored antics. Even with all of the craziness about, I did not encounter any real altercations, only impromptu performances of ones.

Another guest, dressed up as a werewolf, ran around giving hugs to lift people’s spirits. I also saw that some strangers, who noticed passerby cosplaying characters from the same franchise, would begin talking in character as if they knew each other. It was remarkable to see how all of these strangers could get together and have fun.

More information can be got- ten online from the fair’s official website at https://www.carolina. renfestinfo.com. Each ticket is $25, and the experience is worth more than the price of admission.