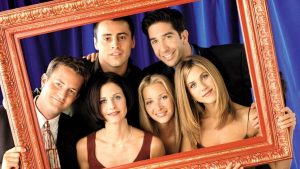 ‘Friends’ has been a smash hit since it’s arrival on netflix in 2015, but sadly the show will be leaving the streaming site in 2020. Photo by Metro

After it was announced that the ever-iconic show “Friends” would be leaving Netflix for HBO’s new streaming site, HBO max, fans have been left asking “What now?” For many, “Friends” was their go-to binge-watch show. Now that all 236 episodes will be departing the streaming site, viewers are left to wonder what to watch.

Well, fear not. Here is a list of five Netflix originals to start instead of binging “Friends” for the millionth time.

Alison Brie stars as Ruth Wilder in “GLOW.” The show focuses around a wrestling circuit of hilarious, neon-clad women in the 1980’s called The Gorgeous Ladies of Wrestling. It is a Netflix original and has been renewed for a fourth and final season. This comedy-drama series will leave you wanting more. “Glow” obtains a Rotten Tomatoes’ score of 93%, and has won many awards, including a Primetime Emmy Award for Outstanding Stunt Coordination, a Screen Actors Guild Award for Outstanding Performance by a Stunt Ensemble in a Television Series in 2019 and a Satellite Award for Best Television Series in 2018. I can guarantee you the hype around this series is well deserved.

This show will make you laugh, cry and laugh some more. Currently filming its third season, this Netflix original has a 97 on Rotten Tomatoes and has been well-received by audiences. It follows four close friends growing up in a predominantly Hispanic and black neighborhood in South Central Los Angeles that is filled with gang activity and violence. Monse, Cesar, Ruby and Jamal have to rely on each other while they navigate love, high school and family issues. It has gotten a ton of positive reviews in the media about being a diverse show.

TV Guide stated in their review of the show that, “On My Block is Netflix’s next groundbreaking show because it is unlike anything else we’ve seen on television. The show feels like an authentic representation of what it’s like to grow up in South Central (or Independence Heights in Houston or the South Bronx in New York City or any number of communities of color throughout the country). It can be heavy, but it can also be funny. These kinds of stories are still rare on TV, but the people making the show hope that changes.

This show debut last year on Netflix and has a second season followed not too far behind. This show is a reboot of the original “Queer Eye for the Straight Guy” that appeared on Bravo in 2003, and it has found its way into the hearts of millions of Americans. It features the fab five of Antoni Porowski, food and wine expert; Tan France, fashion expert; Karamo Brown, culture expert; Bobby Berk, design expert and Jonathan Van Ness, grooming expert. They will visit men and women in and around Atlanta, all of whom have different beliefs than our fab five, and they come in and revamp their lives for the better. There are moments of social commentary, life advice, humor and so much more. This show will warm your heart and make you smile. It is also worth mentioning that it has won five awards, three of which were Emmys.

If you are a fan of “The Office,” then you are in luck. The loveable Ellie Kemper, who played Kelly Hannon in “The Office,” stars in this four-season comedy. It is goofy, light- hearted, and has a cast you will fall in love with. The series focuses around the naïve and good-natured Kimmy Schmidt, who has moved to New York after being rescued from a 15-year stint of being kidnapped and held in an underground bunker. She moves in with Titus, a flamboyant and overzealous wannabe actor, and the two form a dynamic duo. Throughout the seasons, we watch Kimmy be reintroduced into the modern world, make friends and mistakes, and readjust to life that is not controlled by a doomsday cult. Jane Krakowski, who plays Jacqueline White on the show, won the critics’ choice “best-supporting actress in a comedy series” for her role in 2018.

The show follows two women, Grace and Frankie, who become unlikely friends after their husbands announce that they are leaving the women for each other. The two have been rivals in the past, but with the shell shocking news, they are brought together and come to realize the only constant and reliable thing in either of their lives is each other. This five-season comedy is smash hit, with a sixth season coming in 2020. It stars Jane Fonda and Lily Tomlin as Grace and Frankie, respectively. The chemistry between the two is undeniable, partly because the two were costars in the movie “9 To 5” back in 1980. This and the overall humor of the show makes it an enjoyable watch, and many people agree.

While its departure in 2020 will be disappointing, “Friends” will still be there for viewers at least for a little while. Just know there are many other shows out there for you to watch. Hopefully, you will fall in love with one of the amazing Netflix originals that found its way onto this list.